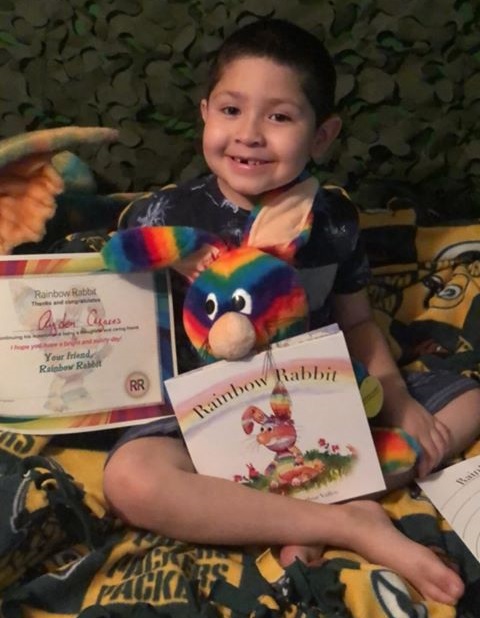 During National Bullying Prevention Month, Team Rainbow Rabbit is profiling bullying victims who have been able to rise above their troubles despite encountering many obstacles along the way.

In the case of Ayden Sainez, he’s not only overcoming bullying, but open heart surgery as well.

According to Ayden’s mom, Nelly Sainez, it started last October, when Ayden was beginning Kindergarten at his elementary school in Elementary School in Plainfield, Illinois.

“It was in music class. He was kicked, bitten and his head was pushed into the concrete by several students,” she said.

Nelly, as well as other bullied children’s parents from Ayden’s class, approached the school regarding several incidents, but nothing appeared to change.

“The school told me they were increasing supervision. Yet, it continued to happen,” she recalled. “I was told ‘kids will be kids.’ Ayden was called an ‘unlucky’ boy by the school principal after he appeared to be a target. The parents were afraid of the repercussions. They also stated that nothing had changed in the past and wouldn’t change now. Many didn’t have the time to follow up due to work.”

The reluctance of the other parents, however, didn’t stop Nelly from moving forward.

“During the process of finding help, I contacted our local state representative and city’s mayor, but they all turned the cheek. They stated that this should be addressed by the school district. At times, I felt hopeless because so many chose to not hear my cry for help. All I want is to raise awareness on bullying and how it affects our children. Our children have the right to a safe learning environment.

“Initially, I wanted to take Ayden out of school. After considering a lot of things, I decided not to. Ayden already felt that he was doing something wrong. He was being blamed for the bullying and being called an unlucky boy. He would ask us what it was that he was doing wrong. By putting him somewhere else, we would had made him think he was the problem. We chose to help build his confidence and help him face this challenge.”

Luckily, Ayden was able to finish the school year without further incidents taking place. However, just as he hurdled one obstacle, another one was right around the corner. This past June, Ayden was diagnosed with a congenital heart defect. While coming to terms with his diagnosis, Ayden, with the help of Nelly, launched Ayden’s Fulfilling Your Birthday Wish— a Facebook page featuring Ayden helping others who are less fortunate while spreading an anti-bullying message.  Despite the severe obstacles he was facing, Ayden never lost his desire to help others and treat them with kindness.

“This came about as my husband, Ranfere, asked Ayden to let go of some of his old toys. His condition was to give those to another kid so they could enjoy them. After seeing how gratifying it was to give to other kids he came up with what seemed like a crazy idea. He said, ‘Mom, I want to make kids happy on their birthdays.’ We began the page and slowly began getting followers. He makes videos and speaks about bullying. His message is simple: be kind.”

Thankfully, Ayden’s condition was diagnosed in time, and he underwent successful surgery in August. Naturally, the Sainez family expressed concern that the bullying behavior previously shown by students in Ayden’s class would continue upon his return to school. For the most part, however, things have improved.

“Overall, things are much better, Nelly said. “Prior to Ayden starting the school year, I wrote a letter for parents and the students. I asked the kids to be Ayden’s friend and lifesavers. It explained briefly that he had a heart condition and needed their assistance to help him stay healthy. We had a parent reach out and had her daughter stop by with a gift for Ayden before having heart surgery. She wanted to reassure him things will go great and that he had a friend in her. Ayden returned to school two weeks after his surgery. He is doing really well.

“When Ayden returned, I was made aware that one child in the class was trying to intimidate him, but his classroom friend stood up for him. There is an updated safety plan that meets his current needs. The school has room for improvement in regards to communicating issues to me, but things have improved and I hope that we are heading on the right track.”

It is yet to be determined whether Ayden is out of the woods yet in regards to the severe bullying he encountered last year. However, he has overcome so much that there is no doubt he will persevere, and Nelly Sainez will never give up the fight to secure her son’s safety—whether it involves school counselors, lawmakers, Congressmen or even and state senators.

“I would tell them that bullying is real. Although we cannot agree on a definition for bullying, what we can agree on is that it impacts children for the rest of their lives. We must explore changes in our laws to protect our children. In our case, it would require that schools enforce their zero tolerance policy on bullying, that all incidents be reported and the right care be given to the victims. Lastly, training and preventive education should be given to the school staff in order to avoid having your child labeled as an “unlucky” child, all because the staff is not trained to handle these situations. Every child has the right to a safe learning environment. Let’s create that culture for them.”

You can learn more about our Rainbow Rabbit Anti-Bullying/Kindness Programs here.

Questions or comments? Email us at [email protected]

nextWin An Educational Program For Your School From Rainbow Rabbit!